Who was St. George

George was born to a Christian family during the late 3rd century. His father was from Cappadocia and served as an officer of the Roman army. His mother was from Lydda, Palestine (now Lud, Israel). She returned to her native city as a widow along with her young son, where she provided him with an education.

The youth followed his father's example by joining the army soon after coming of age. He proved to be a good soldier and consequently rose through the military ranks of the time. By his late twenties he had gained the title of Tribunus (Tribune) and then Comes (Count), at which time George was stationed in Nicomedia as a member of the personal guard attached to Roman Emperor Diocletian.

According to the hagiography, in 303 Diocletian issued an edict authorizing the systematic persecution of Christians across the Empire. The emperor Galerius was supposedly responsible for this decision and would continue the persecution during his own reign (305–311). George was ordered to take part in the persecution but instead confessed to being a Christian himself and criticized the imperial decision. An enraged Diocletian ordered the torture of this apparent traitor, and his execution.

After various tortures, beginning with being lascerated on a wheel of swords, George was executed by decapitation before Nicomedia's defensive wall on April 23, 303. The witness of his suffering convinced Empress Alexandra and Athanasius, a pagan priest, to become Christians as well, and so they joined George in martyrdom. His body was returned to Lydda for burial, where Christians soon came to honor him as a martyr.

Veneration As A Saint

A church built in Lydda during the reign of Constantine I (reigned 306–337), was consecrated to "a man of the highest distinction", according to the church history of Eusebius of Caesarea; the name of the patron was not disclosed, but later he was asserted to have been George. The church was destroyed in 1010 but was later rebuilt and dedicated to Saint George by the Crusaders. In 1191 and during the conflict known as the Third Crusade (1189–1192), the church was again destroyed by the forces of Saladin, Sultan of the Ayyubid dynasty (reigned 1171–1193). A new church was erected in 1872 and is still standing. 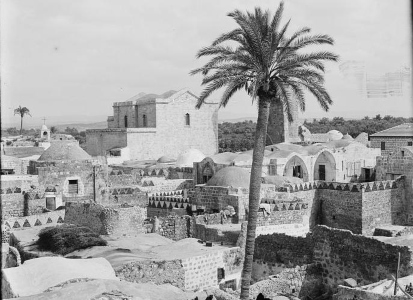 During the fourth century the veneration of George spread from Palestine to the rest of the Eastern Roman Empire, though the martyr is not mentioned in the Syriac Breviarium[2] and Georgia. In Georgia the feast day on November 23 is credited to St Nino of Cappadocia, who in Georgian hagiography is a relative of St George, credited with bringing Christianity to the Georgians in the fourth century. By the fifth century the cult of Saint George had reached the Western Roman Empire as well: in 494, George was canonised as a saint by Pope Gelasius I, among those "whose names are justly reverenced among men, but whose acts are known only to God." According to the Catholic Encyclopedia, the earliest text preserving fragments of George's narrative is in an Acta Sanctorum identified by Hippolyte Delehaye of the scholarly Bollandists to be a palimpsest of the fifth century. The compiler of this Acta, according to Delehaye "confused the martyr with his namesake, the celebrated George of Cappadocia, the Arian intruder into the see of Alexandria and enemy of St. Athanasius".

Saint George and the Dragon

The episode of St George and the Dragon was Eastern in origin, brought back with the Crusaders and retold with the courtly appurtenances belonging to the genre of Romance (Loomis; Whatley). The earliest known depiction of the mytheme is from early eleventh-century Cappadocia (Whately), (in the iconography of the Eastern Orthodox Church, George had been depicted as a soldier since at least the seventh century); the earliest known surviving narrative text is an eleventh-century Georgian text (Whatley) 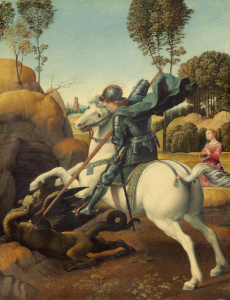 In the fully-developed Western version, a dragon makes its nest at the spring that provides water for the city of Cyrene in Libya or the city of Lydda, depending on the source. Consequently, the citizens have to dislodge the dragon from its nest for a time, in order to collect water. To do so, each day they offer the dragon a human sacrifice. The victim is chosen by drawing lots. One day, this happened to be the princess. The monarch begs for her life with no result. She is offered to the dragon, but there appears the saint on his travels. He faces the dragon, slays it and rescues the princess. The grateful citizens abandon their ancestral paganism and convert to Christianity.